About the Real Grizzlies

How The Grizzlies Changed a Town

“I personally saw our community transform after the Grizzlies team was formed. Everything changed for the better. I’m so thankful for that.” — Stacey Aglok MacDonald, Producer

For a town that held one of the highest teen suicide rates in North America before the Grizzlies program took hold, where 50% of kids never attended high school and where just graduating from high school is a huge accomplishment, these kids are extraordinary ambassadors for what is possible when you join together.

Stacey Aglok MacDonald, a lead producer on the film grew up in Kugluktuk before The Grizzlies came. She recalls, “life was very challenging then. I remember always just thinking that I wanted to get out, I needed to get out of there. The Grizzlies started just in time for my younger sister to get involved in that program with all of her friends, and it changed the whole momentum of the town. Her high school was completely different than what I had experienced in our community. Everything changed for the better. I’m so thankful for that and I know they’re all grateful for that because they’re beautiful women and men now doing amazing things. It’s scary to think about what if The Grizzlies had never started and what that would have meant for them.” 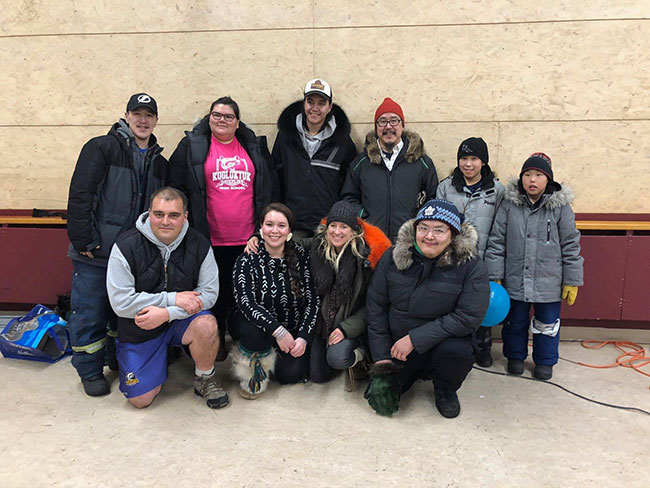 Miranda Atatahak is currently a Career Development Officer for the government of Nunavut.

Kyle Aviak is living in Yellowknife while working in a Diamond mine.

Adam Kikpak is the Assistant Recreation Coordinator for the town of Kugluktuk.

David Topilak (Vinny) works for the government of Nunavut.

“Screening The Grizzlies in Kugluktuk was energy on a whole other level. I had seen the movie at a couple other Film Festivals and it was amazing every time but sharing in the movie with my own People was without a doubt the most gut-wrenching, heart warming, nerve wracking, incredible experience. The house was packed. When the cast and crew began their opening remarks the crowd began to chant Team Grizzly cheers. That moment was so intense and so full of pride that it sent a shudder down my spine. I can see the faces of those in the audience that evening and hear your voices. I don’t think I will ever forget that moment. My heart swells and my eyes fill with tears as I remember it.”

The Town of Kugluktuk

Kugluktuk is an Inuit community located north of the Arctic Circle in Nunavut. It sits at the mouth of the Coppermine River where it feeds into the Coronation Gulf, which is part of the Northwest Passage.

The Canadian Government began to establish their sovereignty over this area of the Arctic by opening an RCMP station in the early 1930s. By the 1940s Inuit children from the central arctic region were being taken from their families and sent away to residential schools across the country.

Kugluktuk, like many Inuit communities, has a fairly recent history of contact with settlers. Many Elders grew up on the land, many living adults born in igloos and caribou skin tents. The history of colonization is held within the lifetime and memory of many Inuit and the transition has not always been an easy one.

Today, Kugluktuk is home to 1,400 Inuit.  It is the proud home of many artists, leaders and of course, The Grizzlies.